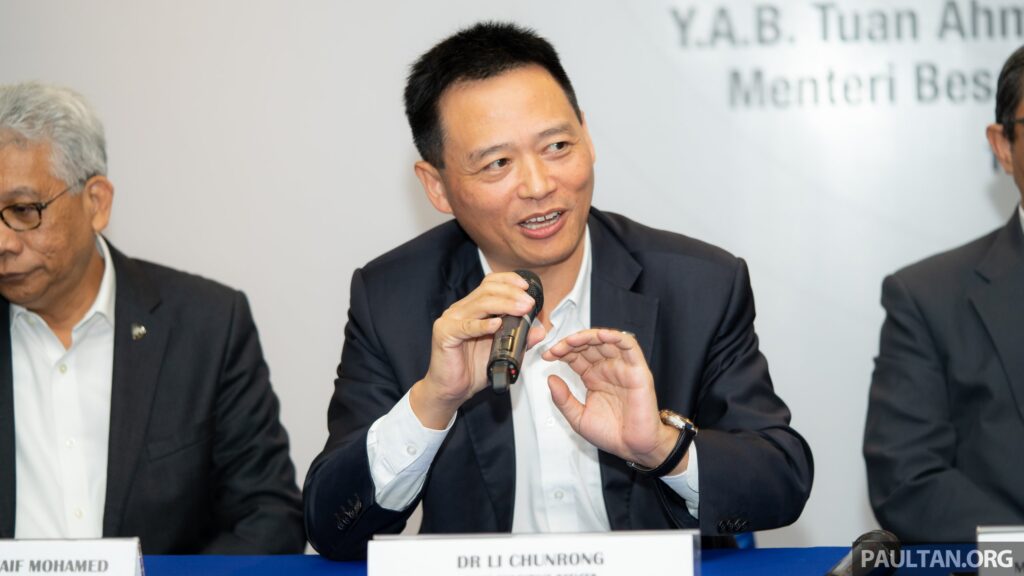 With Dr Li Chunrong at the helm, Proton Holdings Bhd has found itself on more firm ground as it celebrates its 35th anniversary this year. However, in the cutthroat vehicle manufacturing market, it must find a means to be sustainable.

Given the scale of the home market, the national carmaker must expand beyond it, as Li, an engineer by training from Huazhong University of Science and Technology, understands. After suffering for years and losing the group and the Malaysian state billions of ringgit, Proton has to be a player in the foreign market to secure its future.

But first and foremost, he wants to see Proton reclaim the top spot as the most popular automobile brand in the country.

“For Proton, the more important thing is we must grow in Malaysia first. How to lead our business to become stable is very important. It is very easy to spend money, but very difficult to make money.

“For me, I want to be No 1 in Malaysia first, and then go outside to the Asean markets. But we don’t want to stop [there]. Now we are already in Brunei, not only the basic models, but also the X70,” Li tells.

How did Li achieve this feat?

It all comes down to advances in two areas: technology and operational management, which have led to the market’s renewed faith in Proton’s products, ranging from the A-segment Saga to the C-segment X70.

“If you look at the X70, you will find many technologies which you cannot find in our competitors’ models. For example, technologies in connectivity, the interior …”

He claims that some rival manufacturers’ interiors are composed of plastic, but not the X70.

“So until today, only Proton can produce this kind of complete product at a reasonable price in Malaysia. Malaysian consumers are very smart. They know this is new technology, but at the same time, the price is very reasonable.”

According to Li, Proton’s operational management absorbed best practises from Geely and its subsidiaries. The Volvo Global Customer Product Audit (GCPA) system, for example, ensures that the quality of its goods continues to improve.

A product with a higher GCPA demerit score has more quality faults than one with a lower score. This suggests that the quality of Geely’s products was better in 2017 than Perodua’s, which was ahead of Proton’s.

Proton’s demerit score has improved in recent years, according to Li. It is now at most 1,100 points for the Saga, and it occasionally dips below 1,000.

“So we have improved a lot. I believe our basic products now, including the Saga, are much better in terms of quality compared with our peers,” he says.

These enhancements have prompted automobile purchasers to return to Proton dealerships to look at the company’s whole lineup, not just the X70. While the X70 is the market leader in the SUV sector, Li understands that the A and B segments are where the money lies.

Before the shift in management, Proton was selling roughly 2,500 Saga units every month. Now, Proton is selling nearly double that amount. According to Li, the Saga sold 4,447 units in June, while the Persona has surpassed the Toyota Vios and Honda City in the B-segment sedan market.

While Proton improved its products and after-sales service in 2019 and regained lost market share, it still has a long way to go to achieve its objective of becoming Malaysia’s number one automaker.

Proton had sold 27,455 units as of May 2020, accounting for 21.2 percent of the market. Perodua, on the other hand, sold 52,920 units in the first five months of the year, giving it a market share of 40.8 percent, nearly double that of Proton. This signifies that non-national brands lost market share as a result of the growth in market share.

Proton sold 27,455 units between May 2020 and May 2021, accounting for 21.2 percent of the market. In the first five months of the year, Perodua sold 52,920 units, giving it a market share of 40.8 percent, nearly double that of Proton. This indicates that non-national brands lost market share.

So how does Proton intend to overtake Perodua?

Li believes that if Proton manages to continuously improve its products and after-sales service, the market will shift towards the brand. At the same time, developing new models that capture the imagination of the market will be crucial.

Proton will be launching its new mini SUV, based on the Geely Binyue B-segment SUV, later this year. The group also aims to develop its own model, taking into account its capabilities as well as market demand.

“We will focus on product development throughout the 10-year period (2017 to 2027). This is a difficult task because to develop a model, it takes around four years … for example, if I develop a car, it will not be launched today.

“Can you see what is going to happen in four years? It is very difficult. Not only do I have to understand this market, but also other markets. What is changing in the automotive world?

“If we develop a model and we fail, we will lose RM1 billion. If we fail with two models, we lose RM2 billion. At the same time, we lose opportunities. So this is why R&D, and also how to lead this company to move forward, is critical. You cannot lose two models. If you lose, this company will go bankrupt,” he explains.

However, the collaboration between Geely, DRB-Hicom and other companies within the group will be able to help Proton in its endeavor, says Li. “There are things that you can do, and there are things that I can do. We are a team, we work together, and then we can create something that other people cannot do. For example, we launched four models in eight months.

“Can you believe this could happen in Malaysia? We worked for 14 hours every day … that’s why we could launch four models in eight months,” says Li.

It is undeniable that the automotive industry is very competitive, especially in the present day, with automotive technology constantly evolving. Electric cars and autonomous vehicles are among the areas that have seen tremendous advances.

For a carmaker that has been struggling with quality and brand image issues, Proton has not been able to shift its focus towards developing new technology to keep up with global car makers.

That will be another challenge for Li, whose tenure at the national carmaker has just been extended, as he takes Proton into the future.